This week the Intergovernmental Panel on Climate Change (IPCC) issued a shocking Special Report on the devastating impacts of global warming already upon us, and the dangers we can expect going forward.

The report, commissioned by the United Nations, contains a critical message for residents of coastal areas, such as Long Island Sound coastal communities.

Since the 19th century, global temperatures have risen by 1.8 degrees Fahrenheit (equal to 1 degree Celsius). The report shows how a further increase of just half a degree– to 2.7 degrees Fahrenheit, or 1.5 degrees Celsius– will cause a significant rise in sea levels, increased heat levels, and extreme weather, inundating coastlines affecting tens of millions of people. The report states that at current rates of warming, these impacts are very likely to happen in our own and our children’s  lifetimes as early as 2030 to 2052.

Asked about the new report,  Basil Seggos, Commissioner of New York’s Department of Environmental Conservation, noted: “The IPCC report detailing the catastrophic consequences of climate change should be required reading for all world leaders. The report, authored by leading climate scientists from around the world, contains compelling evidence of the accelerated pace of severe economic and environmental impacts associated with rising waters and a warming planet….”

An analysis of the report by The New York Times is particularly horrifying. The Times says: “Holding warming to 1.5 degrees Celsius… would entail a staggering transformation of the global energy system beyond what world leaders are contemplating today. Global greenhouse emissions would need to fall in half in just 12 years and zero out by 2050…. Virtually all of the coal plants and gasoline-burning vehicles on the planet would need to be quickly replaced with zero-carbon alternatives.” 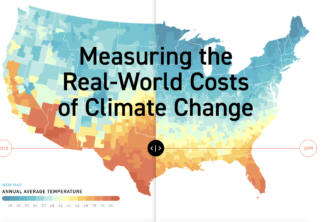 Separately the Times published an online zip code calculator created by the Climate Impact Lab that tells local residents how much hotter Larchmont, New Rochelle, Rye, Pelham, and other areas, are today compared to the time when residents were born and in the future. ( The database goes back to 1960.)

Fortunately for southern Westchester residents, New York State is a leader in lowering greenhouse gas emissions.  The Regional Greenhouse Gas Initiative, established in 2009, put in place a model program to reduce CO2 emissions from power plants in 10 northeast states  including New York. It was the first “cap and trade” program in the U.S. to limit CO2 emissions from power plants. After more than 6 years, the program has reduced emissions by about 45 % across its 10-state region. But given the IPCC’s recent findings, a program like this would have to do much more, especially outside New York state.

New York state currently gets just 2% of its electricity from coal-fired plants and Governor Cuomo has pledged to end the use of coal by 2020. Plants may be required to transition to cleaner energy fuels or shut down under new proposed regulations. (But the largest CO2 emitter in the state is the transportation sector, not power plants.)

Across the nation, however, and under President Trump’s administration, the use of coal is still favored. In fact, coal-fired plants now account for about 30% of the electricity generated in the U.S. So eliminating coal as an energy source, as the report would require, is a huge challenge.

The IPCC report is the most recent in a series commissioned by the United Nations and is written and edited by 91 scientists from 40 countries who analyzed more than 6,000 scientific studies. The report was prepared under the scientific leadership of three IPCC working groups: Working Group I assesses the physical science basis of climate change; Working Group II addresses impacts, adaptation and vulnerability; and Working Group III deals with the mitigation of climate change.

More information about the IPCC is available here.