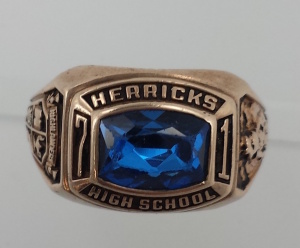 We had a little Christmas Miracle right here.

Last week, a woman walked into Wallach Jewelers in Larchmont with an old High School ring from Herricks High School on Long Island. She found the ring under the rug in her new apartment in Yonkers, but came here to Larchmont to sell it to the Wallachs for the value of the gold.

But Gina Wallach thought about it just as she was about to melt it down on the scrap pile.

“I thought it would be such a great thing if I could find the owner.”

Go Gina went on Facebook. She found the Herricks High School Facebook page, and posted a note asking if anyone knew someone from the Class of ’71, with the same initials engraved in the ring, “DRG.” 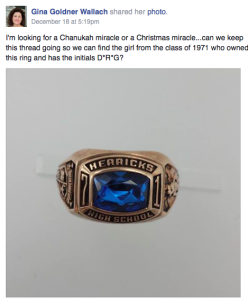 “Help me make a Holiday miracle and lets find this girl,” she wrote.

Somebody went to the 1971 year book, and identified five girls in the yearbook with the initials “DG,” since middle initials were not used.

Then, Ruby Ackermann Engel, of Larchmont, who was home sick and reading Facebook, thought she knew someone.

“Did you lose your High School ring?” she asked.

“The ring disappeared 26 years ago!,” Diane would later tell the Wallachs. And the last time she saw it was when they moved from Connecticut to Larchmont.

How it ended up in Yonkers, from Stamford, and was returned to Larchmont…and saved from the gold melting machine, can only be explained as a Christmas Miracle.

“We feel so happy and we have the most wonderful warm feeling that we were able to return a lost momento to a woman and it was special to her,” Gina told theLoop.

Special? She had given it to her High Scool boyfriend when they were going steady. And they are married to this day.

“We did it for no other reason”, said Gina, “than that we just wanted to do something nice.”