‘Chap’ Gets 500th Win for Mamaroneck 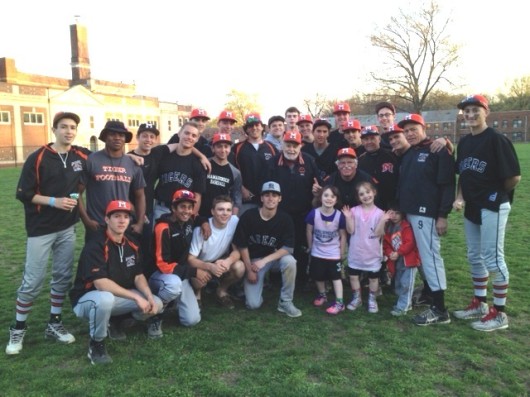 from the Mamaroneck School District PR :

Mamaroneck High School’s Varsity Baseball team had reason to celebrate this past Friday, May 2nd, when the team traveled to Mt. Vernon High School for one of the two annual league games and left with a 500th game win for Coach Mike Chiapparelli, who has served as head coach for the Tigers for 30 years.  Despite the Tigers’ hefty lead (winning 12-0), Coach Chap — as he is so affectionately known – coached vigorously until the very end, just like he does in every other game.

Pitcher Kumar Nambiar, junior, had a no hitter for 5 2/3 of his 6 innings pitched, and the offense was led by Richie Barrella, who went 4 for 4 with three RBI. Twins Andres Makarem and Gabe Gave Makarem added two hits and one RBI apiece.

Michael Chiapparelli has coached at Mamaroneck High School since 1979.  He has been involved with the baseball program for 34 years and the varsity baseball coach for 30 years.  He also coaches varsity ice hockey, and between the two sports, is hoping to make it to 1,000 wins sooner rather than later (He’s already at 898!).  During his three-decade tenure, Coach Chap has an overall record of 500-223-4, an astonishing winning percentage of .692.  Each season, he, has one of the largest teams around — approximately 25 kids per season.  He has coached over 750 athletes, and, in this time span, about 70 athletes have gone on to play Division 1 at the college level, and three athletes play in the pros — Marcel Galligani, Chris Vasami and Sean Hagan. Between ice hockey and baseball, Chap has coached 27 Con Ed Award winners (one of the most by any coach) and at least one Diamond Nine Award (scholar athlete) winner every year since the award’s inception.

For the past 21 years, the baseball team has traveled during spring break to tournaments in places such as Las Vegas, North Carolina, South Carolina and Florida to prepare for the season and has had the chance to play in three National Championship Tournaments.  Our athletes get exposed to other teams/talented athletes outside the NY area, develop skills and practice in a format similar to the State tournament; it’s also a team-building for our athletes to sleep, eat and live baseball with each other.

“I have had the honor of coaching great kids who play hard every day, and I’ve always appreciated their effort, along with the terrific support I’ve received from our community and the District,” Coach Chap said.  “My goal is to develop fine young men through their love of the game.” Each year, he makes sure that his players give back by running after-school clubs and camps with the younger kids.

Coach Chiapparelli attributes his and the team’s success over the years to a dedicated and knowledgeable coaching staff:  Joe Glaser, Bart DiNardo, Don Novick, Bobby Lowman and Manager Kurt Jackner.

“I am grateful top my wife, daughter and family for putting up with all of my hours coaching and have been privileged to have been able to coach both of my boys,” he added.