Home Towns Larchmont "But It's Just a Little Scrape": Why Car Body Repairs Cost So...
TownsLarchmontLocals

“But It’s Just a Little Scrape”: Why Car Body Repairs Cost So Much

I was backing out of a friend’s very narrow driveway in Larchmont when I heard the scrape. The stone wall had (somehow, just jumped out and) collided with my car leaving a nasty little scrape and dent behind the rear wheel.

I took it down to J&F Chatsworth Auto Body, (aka the Gulf station at the Larchmont Train Station) where everyone I know is treated fairly. This father and son team keep the shop running so smoothly, and so spotlessly, that the younger Vinny had his wedding photos taken in the booth where the paint dries.

“Let me take some pictures,” said owner Vinny Sparano. This would give Vinny the chance to tell the story he’s always wanted to: why cars cost so much to repair and why body shops charge what they do.

Some people don’t want to know how the sausage is made. But if you have ever wondered what goes into fixing “a little scrape,” and why it can cost a paycheck, you will find this  fascinating.

“People don’t understand why a little dent costs so much to fix,” Sparano says. Even some insurance adjusters don’t get it.

Setting up shop— Before your car ever gets there,  yearly expenses for a garage can be daunting. The booth that gets to 145 degrees to dry the paint is about $4000/month to Con Ed. Liability insurance is $30,000 a year. Even some of the specialized tiny bottles of paint can be $260 each.

Blue printing- (right)  Sparano first marks up the car with a blue pen to draw a kind of map for the mechanics to work from. Even though my car was damaged on the rear quarter panel, you can see they would remove and install the weatherstrip all the way to the front window because the new panel, in one big piece, will go all the way to the front.

Disassembly- (below) All the trim has to come off down to the lights. More and more, the factory will stock, for example, an entire light assembly, rather than just a taillight, says Sparano,  “because it is not cost effective for the factory to stock it both ways.”

Metal Straightening (below)– “This is where the skill comes in, ” says Sparano,”because we work with the old school hammer and dolly, by hand, to try and get the metal as straight as possible. We don’t use Bondo (body filler) like some shops because it will affect durability down the road.” To get to this point, it’s taken 4 hours.

Next, come body filler application and sanding. (below)

Primer: You can’t just paint over it now. Primer must be layered onto the imperfections. Vehicle paint is very liquidy. So the primer goes on and the car is baked under InfraRed light. (below)  Next, the primer will be sanded to a fine finish.

Paint masking– “Look how far we have to paint past the dent to keep the paint color even on the car,” Sparano says. (Below)

Then comes the sealer:

And three coats of the manufacturer’s specific color of paint, often mixed from a batch of seven different tints: 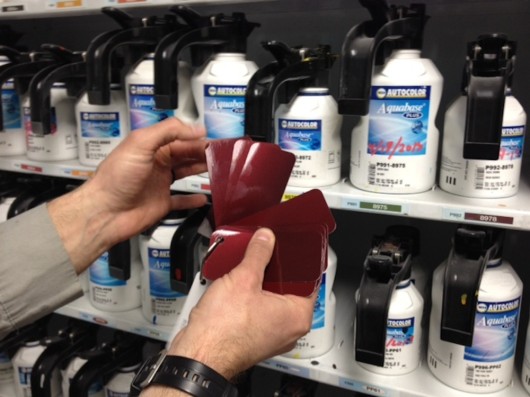 And into the ($80,000) booth she goes. With a layer of UV clear coat, which makes a car look shiny and new. This baby will bake at 145 degrees and when she comes out of the oven…almost ready.  Remember, it all has to be reassembled.

And it’s good as new. Until the next accident.

“Every week, someone asks me, ‘why is body work so expensive?'” Vinny says. “They don’t realize it’s not like painting a wall in your house. Some shops might save a little money by cutting out some of those steps, but the car will start to look worse pretty quickly.”

Clearly, we really recommend this shop. “It’s like a work of art, a car. If I could frame them and put them on the wall, I would.”

Wow I’ve never seen a person so happy to be ripped off. What is the point of any of the first 3 steps? Why disassemble something that isn’t broke? Why is this $2000 when all they did was paint a small location? Why did this take more than 1 hour? If body shops make that kind of money I guess I’m going to body shop class.

We’ve been going to Joe and Vinny for 20 years. Not only do they do stellar work, but they are stellar human beings as well. If you are looking for a used car, ask them. Any car that they have worked on is a car worth buying. Love these guys!!

Very interesting article, it explained a lot. Was prepared to take my car to Larchmont for an estimate on repair of a scrape, only to discover this Larchmont is in New York. My Larchmont is in California. This sucks! :(

This was so informative and helpful to me. A pillar recently expanded itself out while I was driving out of my garage at my job and I just wanted to brace myself for the costs…I am in McLean, Virginia.

How much does it cost?

1) “…We don’t use Bondo (body filler) like some shops because it will affect durability down the road.”

so which is it, body filler or not?…

Yes we use 3m bodyfiller (Bondo is a brand).
Part of the comment isn’t there when I said we hammer and dolly the panel to be a straight as possible before we apply body filler. Some shops just apply body filler right over the dent and just build it up till it is straight. More filler means it would be more brittle and prone to cracking down the road.

Good story, Polly. Not the way you wanted to dig one out, but very effectively told with pics and text.

0
Reply
Previous articleLife in My Suburb- Back to School Soundtrack
Next articleComing Up: New Rochelle Street Fair- Sept. 7