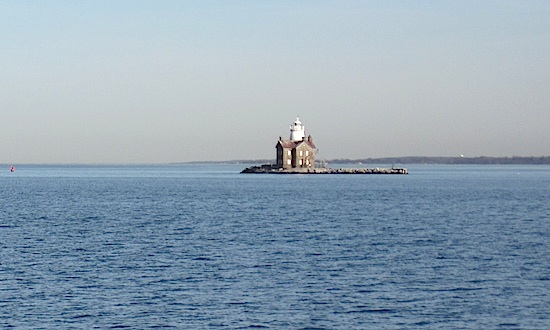 Execution Rocks Lighthouse, poised on a rocky shoal about 2.4 miles south of Umbrella Point in Larchmont’s Manor Park, certainly makes a pretty enough picture. But legend has it that the name of the shoal, Execution Rocks, stems from something much darker and uglier: the grisly practice of  chaining condemned prisoners to the rocks at low tide, where they would await high tide to be drowned.

One version of the legend says the executions were carried out by the Dutch; another points to the British during the Revolutionary era. There is no proof, however, that any of the legend is rooted in truth.

The beginnings of the lighthouse date back to 1837, when Congress appropriated $5,000 for its construction. That amount, though, proved to be insufficient and the project was shelved until 1847 when another $25,000 was set aside for it. The lighthouse was completed in 1850.

As originally built, there was no light keeper’s house on the rocky islet. The keeper instead lived in the base of the tower. A two and one-half story house was ultimately built in 1867. The lighthouse was manned until 1979, the year the keeper was replaced with an automatic light.