The street art was painted on Van Ranst Place bordering Columbus Park off Mamaroneck Avenue. Under grey skies, neighbors of all ages took brush in hand to paint a bit of each of the letters to read Black Lives Matter.

“Hopefully (this mural) will make this make some changes here in our community and let people know that we can work together. That’s most important to me,” says Lavet Jackson, the lifelong Mamaroneck resident whose idea it was for the community to paint a Black Lives Matter street mural in the village.

Many drew upon their own creativity to further illustrate their support of the movement which counters racism and acts of violence. Among the symbols were colorful illustrations of flowers, a clenched fist, and phrases about equal justice. A local artist, who goes by the name of Mouse Mosley, designed depictions representing talents and achievements of those in the community such as musicians, actors, filmmakers, scientists, academics and more.

The painting of such murals began in several cites shortly after the death of George Floyd last summer and the subsequent protests that gripped the nation. The first Black Lives Matter mural was painted in June on a street in Washington near the White House. Locally, the most famous BLM mural is on Manhattan’s Fifth Avenue directly in front of Trump Tower.

To adhere to the Covid-19 social distancing guidelines, the number of volunteers were limited to particular time slots and were required to wear masks.

Jackson says many Mamaroneck residents would be surprised that racism occurs Mamaroneck. “Unfortunately Mamaroneck has hidden things and try to portray that everything is good and it’s time that people know that it’s not and the only way to solve its problems is to bring them forth and work on them together and that for me is what is most important about this. Recognize there are issues and work on them to make things change.” 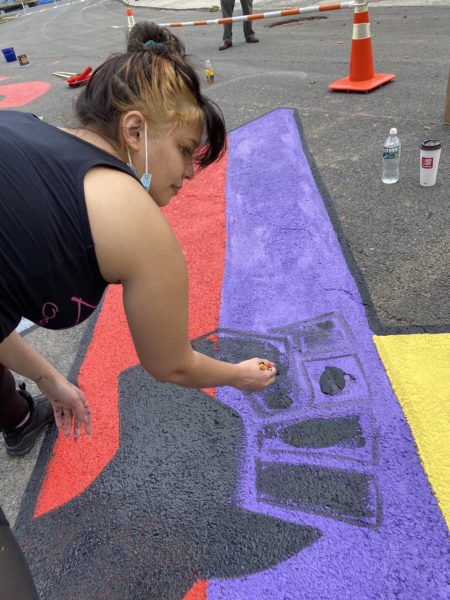 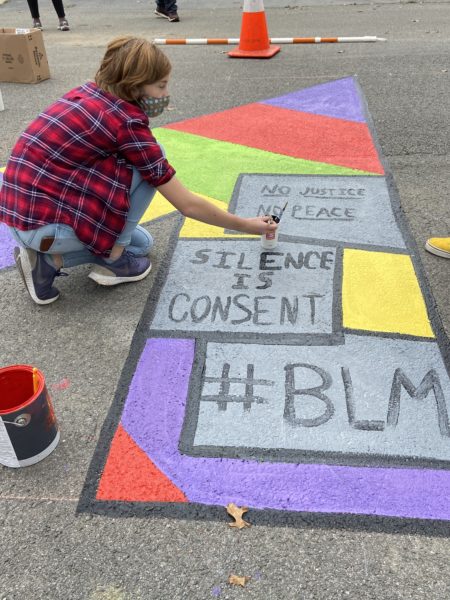 Leaders of the neighborhood group organizing the event say that several local community groups and businesses have donated money to cover all costs. The Village Board of Trustees unanimously approved the mural last month after hearing from a large number of residents in support of the plan. A much smaller number of residents voiced disapproval. Several of them raised objections and worried that the BLM display might attract violence by people from outside the village.

Jackson and her cousin Jarrett Winchester came up with the concept after Covid-19 forced cancellation of a yearly block party that raised money for the needy living in the Washingtonville neighborhood in Mamaroneck. Winchester says he led the move for the BLM street scape in hopes of sparking positive conversation about race and social justice. One such conversation happened before the first brush stroke has been painted.

“One of the residents who was against the original project’s location called me up and said ‘Listen, I will supply pizza for you guys.’ That happened through dialog and listening to his concerns. Communication is key,” Winchester says.

“It’s an important movement. It’s not fair that people get discriminated against based on the color of their skin,” said Chloe, a young teen who became teary with emotion as she talked about her reason for being there. “It’s very powerful. I just want to show my support for the community.”

To the person who wants to equate BLM with rioting and violence, do you know that in Minneapolis, it turns out that the arson of the police station and vandalism/looting of the Autozone were instigated by white nationalist terrorists who wanted to discredit BLM? Some of these belonged to the same group that MURDERED POLICE in California!

Jean, you realize that the riots and violence across the country extend well beyond a single incident of breaking class at an AutoZone? Black lives are dead. Businesses are bankrupt. Cities are burning, in ruins. Apartments have been burned down. Countless assaulted in racially motivated anti-White violence. Families dragged out of their cars by mobs. Open your eyes up.

“Nearly a dozen people – including a 15-year-old – were shot overnight after looting and rioting in Philadelphia.” And this was just the last 24 hours, Jean. If you believe black lives matter, SPEAK OUT against the “Black Lives Matter” rioters and violent terrorists, do not defend them.

already planning to vandalize and destroy this

“NO JUSTICE NO PEACE. “No peace” is a surprising slogan for our town government to stand for. Does the statement against peace here refer to the threat to destroy businesses, burn down apartment buildings, and hurt innocents if the Black Lives Matter does not get the “justice” they demand? Would like an organizer to clarify this.

“No Justice, No Peace” means without justice there is no peace

While I appreciate the circular definition, can we view the meaning of “no justice, no peace” in the context of the BLM movement’s unpeaceful actions over this summer to achieve “justice”? Namely, the use of arson, violence, homemade explosives, and terrorism to achieve political change and gain political power? Is Mayor Tom Murphy aligned with that philosophy?

These would be great questions to dive into. Or coverage of Kamal Flowers, a black man who was MURDERED BY POLICE nearby Larchmont. The Loop’s silence on Kamal Flower’s death is deafening. Can any of the Loop’s reporters comment on why the murder of a black man right on the steps of Larchmont was ignored by the Loop?

“Silence is violence.” Why is the Loop so silent?

Kamal Flowers relatives were at the BLM mural painting.

Dr. King’s formulation contains no threats of violence, veiled or otherwise. He was making a universal point in a particular political context, observing that the antiwar movement (peace) and the civil rights movement (justice) were mutually reinforcing efforts. ‘I see these two struggles,’ he said, ‘as one struggle.’ By fighting a war
against the self-determination of the Vietnamese people,’ the United States was, in Dr. King’s eyes, propagating injustice. To fight against segregation inside the country’s borders without opposing unjust exploitation of the Vietnamese people is to fail to recognize that, in Dr. King’s words that day, ‘injustice anywhere is a threat to justice everywhere.’ Without justice, the thinking goes, peace will be an elusive goal. And without peace, injustice is bound to continue.”

Thank you. Many forget that King paid a huge price for linking the Vietnam War to the civil rights movement at his 1967 “Beyond vietnam” speech at Riverside Church in NYC. It was after that that and until the end of his life that Cointelpro intensified their efforts to discredit him because the FBI believed that he could become a “messiah” who could unify black nationalists .

MLK did not coin the slogan “no justice, no peace.” That’s a lie. The slogan was popularized by Robert “Sonny” Carson, who said in an interview with The New York Times in 1987:

“You don’t give us any justice, then there ain’t going to be no peace. We’re going to use WHATEVER MEANS NECESSARY to make sure that everyone is disrupted in their normal life.”
https://timesmachine.nytimes.com/timesmachine/1987/07/06/998787.html?pageNumber=33

What would cause you to lie about the origination of the slogan, I wonder? My question stands. How can this slogan’s meaning be interpreted following a summer of violence, arson, destruction, murder, racially motivated anti-White physical assaults, and political terrorism carried out in the name of Black Lives Matter?

There is no implied threat of violence with the slogan “no justice, no peace” – the terror and violence of the Black Lives Matter movement’s “no peace” has already arrived in our country, and now its violent message is in our village’s streets.

The BLM protests have been found to be largely peaceful, especially given their nation wide size and occurrence. Have you missed that?