Dear Editrix: Perhaps residents concerned about vacant storefronts will want to be reminded of the longer-term context. 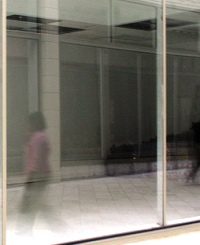 During the 2002 election campaign, we counted storefronts.  Including gas stations I think we came to a total of about 235 within the Village of Larchmont (VoL), Palmer side and Post Road side.  At that time there were maybe 10 vacancies, 5% which was low by comparison to the outside world, and so it wasn’t much of an issue then.

But back in the mid 90’s many of the prominent retail locations were empty, similar to current situation.  The vacancies gave rise, from time to time, to ideas such as hiring an economic development coordinator on VoL staff, or a village manager who could “solve the problem,” or paying for staff for the Chamber of Commerce.  Those ideas always raised budget concerns.

My view was that there is no real economic development to be had for VoL, which is fully built out.  On the other hand, there are good fundamental reasons why the vacancy rates rise and fall periodically, generally in tune with the business cycle.

·                     There are few, if any, destination stores.  Most are convenience or mom and pop stores typically found in bedroom suburbs — nail salons, dry cleaners, small jewelry, shoes, restaurants and bar (my recall is 31 of those), gas stations and auto dealers (Post Road was a major overland artery for 200 years).  And most stores have too little space to produce economies of scale needed to attract larger operations.

·                     Most Chamber of Commerce members need to spend time to make their shops pay, not work on Chamber volunteer projects.  So there is rarely a consistent moving force behind the Chamber — sometimes there’s little more energy, sometimes a little less, but not really a great push over extended periods.  Landlords of the vast majority of properties are not members, and so don’t share in the costs or other burdens of the Chamber.

·                     Another problem is we have two business districts at opposite sides of the village.  By way of illustration parking on the Post Road side is worse, and foot traffic is lower.  These facts propel different interests, which also contributes to problems in the Chamber.

·                     The stores that open during the business cycle upticks tend to be more whimsical in nature, and so tend to be vulnerable to collapsing on the downturns.  Upticks make more money available to “non-professionals.”  The result is vacancies in the downturns, especially in the smaller spaces.

·                     Most landlords are absentee.  They don’t feel the pressure directly from the neighbors to fill storefronts, or make repairs.  They also feel less constraint on maximizing rents during the upticks.  This also contributes to the collapse of marginals, and every now and again of real long-term contributors.  For those who entertain this notion that somehow rents should be controlled, that would likely be declared unconstitutional.

·                     Parking.  The conventional wisdom is that if you give business districts more and more, that will increase store traffic, and so translate into reduced vacancy rates.  That seems to me tempting, but a false proposition.

Parking is free at the railroad station on weekends, so if you want to shop on Palmer, you’ve got 350 spaces to choose from.  Few do.  More likely, the reality is that residents perceive a shortage of parking because they can’t find a spot in front of the store they want when they want it.  For example, residents are happy with our insistence on maintaining rights to night-time parking in the CVS lot, because it doesn’t require much walking to the restaurants, unlike the RR station lot.  The more fundamental concern in my  mind is that if you build more parking, it will be easier for more people to drive to shopping, and the risk is they will do just that.  If so, it would clog the streets even more (especially on streets leading to the parking) and make traffic even more impossible than it already is.  Worse, it would create pedestrian/bicycle safety issues for adults and kids, by virtue of sheer numbers.  Those are the very same adverse effects that propelled our successful fight against IKEA.

Vacancies in the commercial districts that have come and gone with the business cycle are not good reasons to resurrect discussions of such a bad idea.

As a small business owner, I would like to remind people how difficult it is to secure financing for a new business, especially today. Small business loans are harder and harder to come by. I know that when I opened Prodigy Learning Center two years ago, just as the economy was tanking, no bank wanted to entertain the possibility of a loan without significant collateral. I for one did not want to tie my home to the whims of the economic climate, I financed every aspect of my business from renovation to floating my rent for the first year, from my own pocket. Unfortunately, many people can not afford this luxury. In reality, the larger chain stores who have a proven track record are in a much better position to secure financing. I would love to see one of the fifteen or so banks from Palmer Ave to Boston Post Road be more accomodating to their local substituents and take a chance on a local business without a proven track record or the conventional collateral necessary.

In the 38 years I have lived here Palmer Avenue has never had so many vacant stores.

We had stores we patronized, that sold what we wanted to buy, like The Larchmont Store and the sports store, but they tried to grow, and couldn’t make it as larger stores.

IKEA would have been a traffic nightmare, and have brought us nothing but a huge, ugly monster of a store. That does not mean that other, smaller stores, national chains, local chains or single stores that sell something we want to buy, at fair (not necessarily internet) prices, could not make it here, and be welcome.

We do not make it hard for new stores to open here. Yes, there is some red tape, especially for restaurants that do not want to comply with local zoning rules, but the only chain I remember turning down in the 15 or so years I have served on our Planning Board was Burger King, and that was because they insisted on a drive-thru window and on lots of external neon lights–had they been willing to fit into the community they wanted to enter they would have been here long ago (where Fuji Mountain is now).

Lou, if you’re at Friedland Realty, perhaps our area’s largest commercial broker, find us some people, or decent chains, that want to open stores here.

Fascinating. So much stacked up against success – absentee landlords with no stake in community success; an apparently lackluster, non-creative, non-aggressive Chamber, and a squeamishness about allowing any but the “right” stores into our hallowed acreage. It’s a wonder we have anywhere to buy our overpriced knickknacks.
Mr. Bialo is right about the uptick stores-they’re a fun folly for a while, but we won’t go in once a week, let alone twice. Mr. Klein is also right, that Dollaramas are not what we’re after either. Why does it have to be one or the other? Have we said no to every chain that might consider combining a few of these storefronts? Wouldn’t we love our own Pain Quotidien, or indeed any additional good bakery? Why are all the must-go-to restaurants listed in the regions magazines over in the Rivertowns? There’s surely room for more here, since on any Thursday, Friday or wknd night ours are all busy. Quality stores like Voracious Reader seem to be thriving – even with Amazon. Could we maybe have an equally great toy/craft/science store for imaginative families to shop in? How about a branch of American Apparel – every young person’s favorite boutique clothier. We’d draw people from all the other towns, and that would be great for everyone. It’s nice that we will soon have half a dozen places to get frozen yogurt/ice cream, but I worry about them all when winter hits. Stanz could be five times the size it is now, and Bradley’s too. What makes them so successful? Good food, convivial atmosphere. But neither are all that comfortable. Auray clearly didn’t anticipate the number of sit-down guests they’d have or they’d have designed the place differently. Somebody could open a really welcoming sandwich/brunch/coffee and treats place with wi-fi and sofas and make a killing.
And Mr. Klein is right on regarding those CofOs – it seems we hear about the impending arrival of a store about six months before the doors actually open. What takes so darned long?!

Lou,
Hate to disagree with you but your wrong on IKEA. That was a project being shoehorned into the fifth ave corridor. What benefits would Larchmont have reaped from that project other than more traffic at the Myrtle Blvd/Chatsowrth intersection? That light can be brutal at times with local traffic now. How many people in Larchmont would be working Ikea? Not too many when people are paying $1m for an average house. I bet there as many jobs at the local companies in the Fifth Ave corridor as would have been created by Ikea. Many of them are construction related which pay for more than part time retail. Not to mention those companies are paying full property taxes. Larchmont is small because it is small. The Stop & Shop shopping center on Palmer Ave is an example of well placed retail (and the subsequent HomeGoods). Ikea would have been a disaster. I am not sure if Larchmont needs your vision of the future.

agree with much of what Ken says, but really the IKEA fight was.. perhaps the dumbest action that ever happened. What a great message it sends to other “big box” retailers. Even the smaller boxes, why should they do business in Westchester when these “bedroom, suburban communities” just fight it. Imagine all those tax dollars and jobs flushed away.
Imagine all the jobs and tax revenue thrown away in every town like Larchmont, Scarsdale, Eastchester, Chappaqua and Greenburgh because of what ? A desire to stay small ? Please… it is no longer 1985. This is a time when tax revenue is most needed, this is a time when more jobs need to be created. I am not suggesting bringing in 99cent stores, but I am suggesting a more proactive approach to allowing business to happen. Also, town business needs to happen FASTER. Someone wants a CofO, they should have it ASAP, not 3 months later.
Please contact me to discuss projects for Larchmont and Mamaroneck that will bring new tax revenue and jobs to the villages.

Another Update: Snowy Tracks to Track