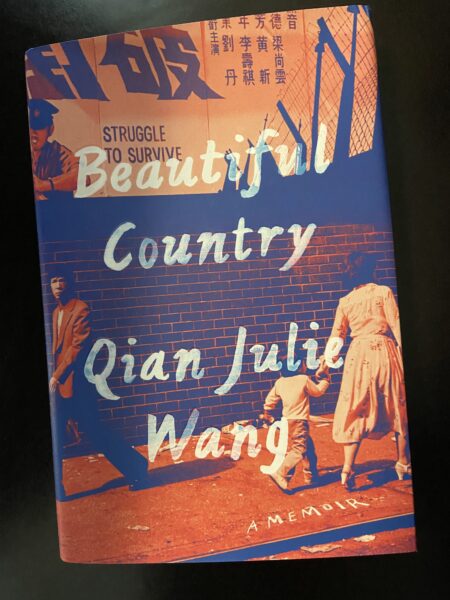 A bestselling author featured as a speaker at the Women’s Club of Larchmont annual holiday luncheon left in tears after, she says, enduring insensitive and belittling anti-Asian treatment from several attendees.

Qian Julie Wang’s memoir “Beautiful Country”, cited by the New York Times as one of the most Notable Books of 2021, reveals her struggle and survival growing up as an undocumented child living in poverty in New York’s Chinatown and feeling diminished and overlooked.

After leaving the December 8 Women’s Club luncheon, Wang wrote on social media that she experienced the same dismissive anti Asian attitudes described in her book, at the event

One woman, Wang says, waited in line at the book signing to tell her she was not interested in reading her book and had waited to tell the author “What do you illegals have to gripe about? Why are you always complaining about America? I know Blacks complain about being poor but you? You are lucky to even be here.”

“During the signing, I talked to a line of people —some thoughtful, genuine and intelligent; many more who wanted me to know that their manicurist was Asian or that their sons were dating Asian women,” Wang posted on Twitter and Instagram

Wang was one of three authors chosen to speak at the event. Two of the others are White and Wang was the third to speak.

“Despite clear pronounciation guides on my website and from my publicists, no one leading the event could say my name. I clearly stated for the MC the correct pronunciation three times. At one point she even wrote it down phonetically.”

“When she introduced the other authors, she gave an original introduction, saying things like “We are so excited to have her here,” and “you might have read about his book in…”
But when it was my turn, the MC just read the description of the book from the jacket and mispronounced my name not just in one way but three different ways (quinn, kwang, kian).”

Then she said, “and she’s the daughter-in-law of [my mother-in-law’s name]!” as if my relation to a white woman justified my presence, and as if it had been a family favor for me & not a personal and enthusiastic invitation the organization made to my publisher.”

“When i got up to speak, the servers jumped into action. Several servers stood right in front of my podium, holding trays and clanking dishes and cups. This may well have been bad timing, but nothing like this occurred during the other authors’ speeches. No one did anything to stop the disruption from mine. It persisted for the duration of my speech.”

Dorothy Rainier, President of the Women’s Club of Larchmont, issued a statement saying, “It is unfortunate that Ms. Wang felt mistreated at our meeting, as evidenced by her social media messages. We regret that the person who introduced her inadvertently mispronounced her name and that Ms. Wang felt that the waiters who were clearing luncheon dishes and serving coffee intruded on her speech.  Finally, if it is true that any of the members or other individuals in attendance said anything inappropriate to her, we would certainly disapprove.”

Rainier added, “She gave a very moving and warmly received talk based on her recent book and her compelling life story.  Her remarks moved many to tears. When the time came for questions, more questions were addressed to her than the other two authors who also spoke and many people lined up to buy her book.”

Wang, is a successful attorney specializing in advocating in education and civil rights, is a graduate of Yale Law School and Swarthmore College.

I’m sorry about the incident, but there will always be an exception. The majority do not feel the same. We need to overcome, live and respect our differences. Otherwise, life will end as we know it.

I get the feeling that Ms. Wang felt slighted by her experience. I am not intimate with any details of the situation, but I see it as a current societal trend that our young people are taught to look at everything from the lens of race. I also wonder if It would have been better for Ms. Wang if she approached this situation from a win-win mind of thinking. The way I see it, I am sure she is feeling miserable, and now she is making others, by her action, especially, the club miserable. I see this as a lose-lose solution. which is not really beneficial to either parties nor to society as a whole. It is sad that this is society is becoming more and more divisive. I wish people can realize sooner that we are more alike than different. and approach issues from a win-win mindset.

My hope is that people learn to accept people for their differences because differences are what make shared experiences worth it. Our differences vary more and more each day. The sooner we accept THAT and learn to live with it, the sooner we, as a society, can move forward.