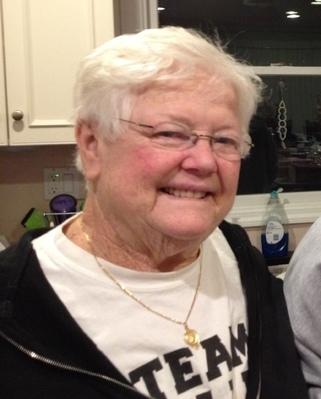 Bernadette Mauro, of Mamaroneck, passed away December 4, 2014, at age 74. Born January 17, 1940 to John & Gertrude Morrissey. Bernadette worked for 15 years managing the food service for Blessed Sacrament School and Mamaroneck Avenue School. For 20 years, she volunteered her time as a CCD Teacher at St. Augustine’s in Larchmont. She also worked for the Law Office of Joan Cooney in Larchmont and was a 38 year member of the Larchmont Shore Club. She is most fondly remembered as a devoted wife, mother and grandmother. She is survived by her beloved husband, Anthony Mauro, her cherished children John Mauro, Concetta Wright (Xen), Anthony Mauro Jr. (Elizabeth), Bernadette Whittemore (James), Edward Mauro (Kara), Gertrude Gallin (Robert), and Joseph Mauro, and 13 loving grandchildren. She is also the dear sister of Catherine Morrissey and the late Joseph & John Morrissey. To honor Bernadette’s life, family and friends will gather on Sunday evening 7-9 & Monday 2-4 & 7-9 at Coxe & Graziano Funeral Home, 767 E. Boston Post Rd Mamaroneck 914-698-5968. Funeral Mass Tuesday 11am at St. Augustine’s RC Church followed by interment at Greenwood Union Cemetery. Donations in lieu of flowers are requested to