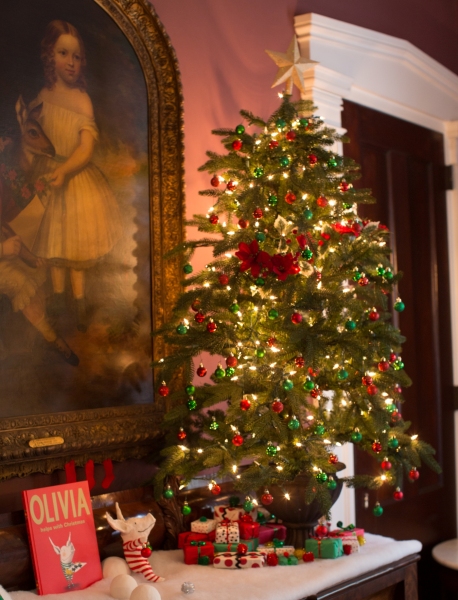 Beginning Friday, Dec. 5, the Storybook Christmas trees set the stage for the season.

Friday evening, the HolidayFirst Friday! features the Hudson Valley Chamber Singers performing  in the double parlors. Throughout it all, visitors can browse for gifts and books in the museum’s holiday pop-up shop (stocked, once again, with the help of Bronxville’s Kensington Paper), and indulge in home-made delicacies.

On Saturday, December 6th the trees serve as  backdrop for theAnnual Holiday Family Day when children and parents alike will enjoy holiday storytelling and crafts, caroling by the Morrisania Glee Club, shopping for gifts, and of course, the much-anticipated meeting—and photo—with Santa. At Saturday night’s Holiday Party, guests celebrate the season—and support the museum—with the mansion in all its holiday splendor. A live auction featuring vacation houses and a very special winter dinner at the mansion, a raffle of over-the-top items including hotel stays, and more ensures the festive feelings will linger on well into the New Year (as do the trees which are up through Wednesday, January 7th).

In the entrance hall…

Alice Pirsu founded her firm in 2010 after working on large residential projects in NYC, Bedford, and the Hamptons for well known NYC designers such as Julie Hillman. A Romanian native, Pirsu holds a bachelor’s degree from the Universityof Pennsylvania and an AAS degree from the New York School of Interior Design. Her designs draw inspiration from modern lines and classical architecture, allowing her to elegantly update spaces while respecting and highlighting their original, historic features. Pirsu uses a variety of natural materials and textures giving her interiors an organic flow with environmentally sustainable choices in design, construction, and maintenance.

In the north parlor…

Suzanne Eason founded her interior design firm in 2006 after years of working as a creative director for luxury brands in New York and Santiago, Chile. She holds a BFA from the Fashion Institute of Technology in New York. Her interiors boldly fuse classical and contemporary design and have garnered many awards. Her work has been published in Traditional Home, Newsday, and The Daily News.

In the downstairs sitting room…

Joshua Greene and Katrina Hernandez make up Hernandez Greene Design. They met while overseeing the interiors department at Sawyer | Berson, an Architectural Digest “ad100” ranked firm. Their hallmark is ultra-sophisticated interiors ranging from modern to traditional and characterized by a refined sense of color, texture, and pattern.

In the dining room…

Upon early retirement from a career at IBM, Tom Berta started an interior design firm called the Decorating Den that was recognized in several national magazines including Good Housekeeping. He now volunteers as a tour guide at both Kykuit, the Rockefeller Estate in Pocantico Hills, NY and Bartow-Pell MansionMuseum.

In the upstairs parlor…

Ken Binder is an interior designer specializing in residential design, but has also worked on hotels, offices, stores, synagogues, and a Middle Eastern palace. Before moving his business to New York, Binder was the senior designer in a major design studio in the Midwest doing projects throughout the U.S. and abroad. He also worked for HGTV, both behind the scene and on camera, and was a regular on the program Room For Change.

Peti Lau began her design career in Thailand and Mauritius—two of the many places she lived during an extended globe-trotting stint. Upon transitioning back from the tropics of Asia to the concrete jungle of New York City, she earned a degree from The New York School of Interior Design. Over the past decade, she has worked on a variety of projects including restaurants, a Gentleman’s Club, an international villa, a post-modern house, pre-war apartments, and more.

Michael Van Nort received a bachelor’s degree in fine arts from BinghamtonUniversity and a master’s degree in elementary education from HofstraUniversity. While teaching third grade, Van Nort realized that his favorite part about teaching was redecorating his classroom, so he returned to the classroom himself to obtain formal training and a degree in interior design at Fashion Institute of Technology in New York and began working at a boutique design firm, Full Scale, Inc. Van Nort went on to work for Jed Johnson Associates and in showrooms for design industry leaders Donghia and Holly Hunt. MVN Design was established in 2013 and focuses on residential interior design and event planning for intimate occasions.

There is a small typo, It should read Bartow-Pell, not Barrow-Pell… Thank you

No worries – Thank you…