The City of New Rochelle held a ceremonial tree planting in observance of Arbor Day on  April 29 at Library Green Park. City and library officials and the City Arborist were joined by staff and students from Isaac E. Young Middle School National Junior Honor Society in planting a Kwanzan cherry tree. 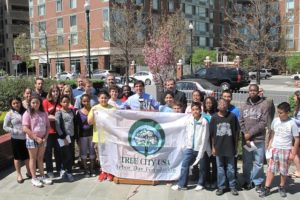 New Rochelle has been a Tree City for 22 years and was recognized on April 1, 2011 as being a Tree City USA Community for 2010 by the New York State Department of Environmental Conservation /Division of Lands and Forests.

In support of urban forestry:

–       The City has adopted a tree preservation and replacement law that governs tree removal on private property larger than one acre and on properties that are subject to site plan or subdivision approval. Trees removed from such properties must either be re placed with saplings or through contributions to a City-administered tree fund.

–       There are roughly 400,000 trees within the City of New Rochelle with an overall canopy covering approximately 18% of the City’s land area. An estimated 29,000 trees are under City ownership. The City plants approximately 250 public trees annually.

–       GreeNR, the City’s Sustainability Plan, has as its goals to expand the City tree planting program and promote private tree planting. To this end, the City of New Rochelle is currently creating an RFP (request for proposals) to identify areas of the City in need of further planting; to create planting standards; and identify types of trees best suited for our neighborhoods.

The City of New Rochelle has planted trees throughout the City in observance of Arbor Day. Most notably in 2009, the City reactivated a grove of historic trees at Davenport Park which were planted in representation of the thirteen colonies.

New Rochelle Mayor Noam Bramson noted, “Arbor Day reminds us of our responsibility as a community to nurture our City’s trees. We will continue our strong commitment to urban forestry, recognizing that trees enhance the beauty of our community, improve property values, protect our natural environment, and help combat global climate change.”