Amazon.com, Inc. announced its successful bid for local news pioneer theLoop, and will build a new waterfront headquarters and news facility over the Larchmont Yacht Club.

A groundbreaking ceremony, to be attended by President Donald Trump, Governor Andrew Cuomo and North Korean President and basketball fan Kim Jong-un is scheduled for tonight, to be followed by an April Fool’s Day Gala.

The 2011 purchase of theLoop by News Corp. (see below) eight years ago today ran into a number of snags, including Federal regulations which are now gone.

“The lack of environmental oversight of the Long Island Sound made our office move viable,” says Loop Publisher Polly Kreisman. “We will have unparalleled views of wind turbines and drilling platforms.”

“Just think of the property tax savings this could bring,” said Westchester County Executive George Latimer, referring to the millions of dollars in revenue and hundreds of new workers gravitating to the new Larchmont campus.

“Out of all the news stories I’ve ever read,” said the President, this one is the fakest.” 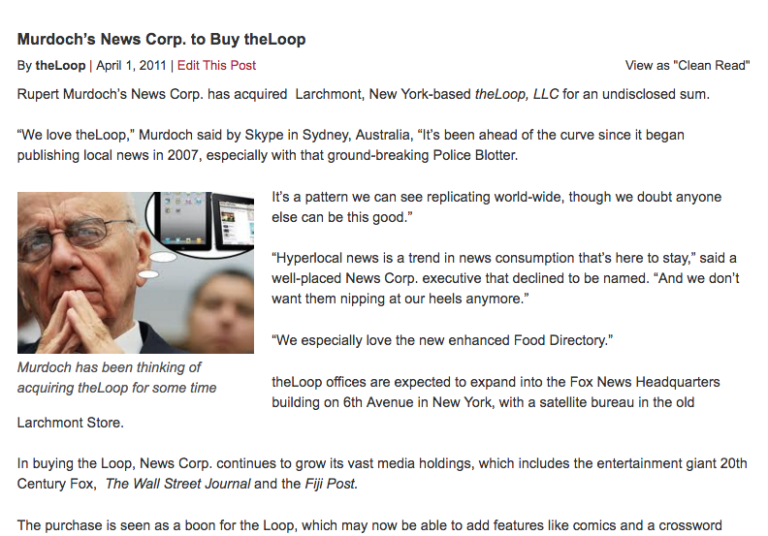 I was wondering why all the new high rises in New Rochelle, now I know, they will house all the Amazon employees…

Fake News! Amazon’s real plan is to locate headquarter’s in Mamaroneck at Harbor Island Park. Jeff Bezos commented that “the Friendly Village will now be Techy Friendly” or “User Friendly” or “Friendly to Users” Whatever….
Mamaroneck’s Mayor, Tom Murphy, was not available for comment.

Very funny! Got me for a split second.