Local writer Judith Dupre wants readers to know about an apparent rise in dog thefts and has a strange story with a happy ending. She writes: 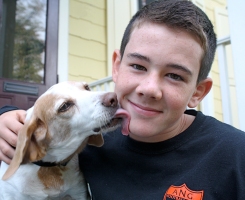 "Dreyfus is home as of last night, thanks to kindness of strangers! Thanks to all who helped and cared. Westchester residents: apparently dog theft (of all breeds, including mutts like ours) is becoming more and more common here. We were lucky to find our dog. According to an anonymous call to my cell, a blonde woman tied a string around his neck and pulled him into her car on Mamaroneck Avenue (3 blocks from my house) on Saturday."

Judith Dupre says she learned the same woman later dropped her dog off at a Petco in Yonkers where a pet adoption fair was taking place in the parking lot, saying, ‘We can no longer keep him,’ before getting into a late-model Mercedes.

"Lisa-Marie Birdsall of Recycled Paws Rescue in Peekskill took Dreyfus in," Judith says, "bathed him, fed him.  She is a wonderful human being and true humanitarian.   Her website lists items that the shelter could really use."

A posting on PetFinder.com reunited Judith and Dreyfus. And at least one 11-year old, Judith’s son Emmet Gaffney, is very happy. The dog looks petty happy too.

These organizations deserve all the help we can give them.