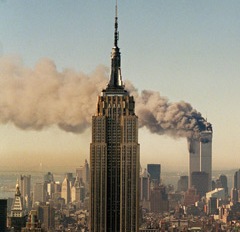 Where were you? For most of us, especially in this community that lost so many, a decade has not softened the blow. A few years ago, we asked you for your memories of that day.

Please tell us again, or for the first time, where you were when the towers fell on 9.11.01, below.

And some local ways to mark the anniversary, check back regularly…

Yonkers, 7:00 pm: New York’s Bravest and Finest Square Off in Comedy Show. New York’s Bravest and Finest square off in the Good Time Room as part of a comedy spectacular sponsored by WHUD Radio. Policemen will take on firefighters in a competition to see which badge can bring the most laughs. The winner will receive a spot in an Empire City comedy night as well as dinner at Empire Terrace and a race named in their honor. Proceeds will go to a September 11th charity. $5. 7 p.m. Empire City at Yonkers Raceway, 810 Yonkers Ave. 914-968-4200.

Morning announcements, Hommocks Middle School:  The principal will commemorate the day in a brief address and then pause for a moment of silence.  Sixth, seventh and eighth grade social studies teachers have prepared lessons with a historical perspective appropriate to the age of their students.

White Plains: Recruiting volunteers! Serve and Learn: Westchester Remembers 9/11. As part of a national call to action to rekindle the spirit of unity that followed the tragic events of September 11, The Volunteer Center of United Way is inviting area residents to honor local victims and heroes by engaging in service to help build a stronger community. Hosted by The Volunteer Center of United Way. To honor victims and heroes, volunteers can participate in a number of service events. The Volunteer Center plans to engage hundreds of nonprofits and corporations in the region with a service exposition. For more information, visit website: volunteer-center.org, or call 914-948-4452. Free. 2-7 p.m. Westchester County Center, Intersection of Central Avenue and Bronx River Parkway. 914-227-9313.

1:00 pm at “Girl Scout Memorial Rock” at Memorial Park, Myrtle Blvd., Town of Mamaroneck: Tri-Municipal 9/11 Memorial ceremony for the victims of the terrorist attacks who resided in our community. Participants will include members of local fire and police departments, the Mamaroneck Ambulance District and local girl and boy scout troops.

6:00 pm, Valhalla – Westchester County will commemorate the 10th anniversary of the tragic events of September 11, 2001, on September 11, 2011 at 6 pm at The Rising, the County’s 9/11 memorial at Kensico Dam Plaza in Valhalla. The Westchester Philharmonic will perform the famed Adagio for
Strings by American composer and 40-year Mt. Kisco resident Samuel Barber, and will be led by the orchestra’s Winter Pops conductor and New Rochelle native Ted Sperling.
For the first time, the annual event will be held at twilight, to allow people to participate in events held elsewhere throughout the region.
County Executive Robert P. Astorino will lay a wreath at the memorial, joined by family members of some of the one hundred-eleven Westchester residents whose lives were taken in the World Trade Center attacks. Other elected officials are expected to attend. The event is free and open to the public.
Call (914) 682-3707 ext. 10 for tickets. www.westchesterphil.org

It was my first day on the job as a home health nurse in Metairie, LA, a suburb of New Orleans. At the home of our first client, my coworker and I were met by his anguished words, “Did you hear what happened?” We stood behind his wheelchair and stared, speechless, at the images of black smoke coiling into the sky. When we returned to our office a short time later, we found the entire staff clustered in tearful silence around a small TV on the conference table, transfixed by the horror of the towers crumbling to the ground and people running, covered in soot, through the debris covered streets of Manhattan.

We were living in WA, DC and I got a phone call from a local friend who told me to turn on the TV. I was home alone with our newborn and
watched the second tower get hit. The Pentagon came next, and my father called begging me to get ready to evacuate, what did we know? Then the phone lines jammed and were a constant busy. My husband was working a block from the White House but I hadn’t heard from him. The most I could do is go to the top floor of our house with the baby and watch the Pentagon burn.

It was my daughter’s birthday and we stopped to pick up cupcakes for her class on the way to school.

I went to work at the newspaper. A colleague poked his head in and told me one of the twin towers was on fire. I didn’t believe him, but went to the tv and there it was. We saw the plane hit the 2nd tower but didn’t understand what we had seen until they replayed it.

I rushed to my office and called my family in Queens and Larchmont who hadn’t yet heard. My family members who had worked in that district forever were all working in other places that day.

I then went to the World Trade Center website which was still up and printed out the list of tenants on the property. Within minutes the site was down.

I spent the next 6 months working on the stories and crying my eyes out.

That night my family tried to call my daughter for her birthday and finally got through. We kept the kids away from the tv and wiped the tears from our eyes while singing to her.

It was until later that I learned of the friends who were casualties that day. I pray for them and for their families regularly.

This is the first time I’ve watched any coverage since then. It is gut wrenching, but I am afraid people will forget and it will just be another day like we treat D-day or Pearl Harbor. I feel like I need to face it. It’s time.

As my daughter has grown we have taught her that even at the worst of times there is something to be grateful for and we are grateful for her.

All of us working at the offices of the Environmental Defense Fund (EDF)atop a building at Park Ave.and E.20th, could clearly see the black smoke rising over the downtown sky on 9-11. In the conference room we watched, our hands over our mouths, horrified as the local TV news anchors talked about the towers’ability to withstand huge impacts. Then disbelief. The first tower came down.

I was supposed to meet my sister who was visiting NYC from Chicago that week, but she was walking around Battery Park while her husband and other ABN-AMRO Execs were holding meetings in the World Financial Center. She and my brother-in-law were staying at the Marriott across from the Towers. (Months later we were allowed to collect their belongings from the hotel- 3 or 4 large black garbage bags covering what was left of their suitcases.

My sister was evacuated over to Hoboken along with a lot of families from the Battery Park apartments, but we didn’t know for the rest of the day what had happened to her. My brother-in-law and colleagues got out of their building and walked all the way up to 57th St. where one of them had an apartment. My sister turned up late in the evening and was okay. But nerves were shot.

At EDF, one of the staff who happened to be Israeli and trained by the Israeli Army to deal with crises, walked with me up Park Ave.- eventually we shared a cab with one of the Port Authority Office workers who got out of the tower before it fell. He was in shock. We got him to a friend’s apartment and split up. I got up to my husband’s office near Columbia, met him in tears, and we drove home.

The most difficult time for me was coming to work for many weeks and months afterwards on the train to Grand Central and then the subway, seeing all the flyers with the faces of people who were missing and whose families and friends were so desperately seeking any information about them.

So many of them are still deeply missed.