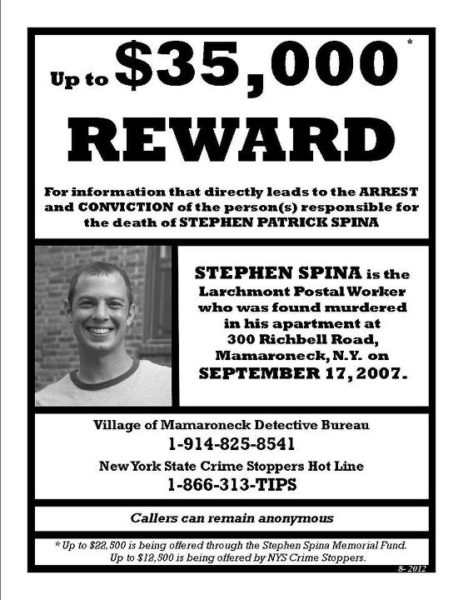 Stephen Spina was a well-known, friendly mail carrier in Larchmont/Mamaroneck, who was found dead in his apartment on Richbell Road in Mamaroneck five years ago Monday. The case remains unsolved, despite diligent police work and a segment on America’s Most Wanted.

Spina’s family sent this to the local media Sunday:

My family is pleading for your help. On September 17, 2007, my brother, Stephen Spina was murdered in his Mamaroneck, NY apartment. Stephen was a local postal worker, little league umpire devoted father to a 12 year old daughter, and one of five children. On his scheduled day off (on a Monday), he was murdered in his apartment.  He was only 36 years old. His death has left a hole in all of our hearts that will never heal. If there is any way you can help us by revisiting his story, my family would be forever grateful.

The local police have done everything they can to try to follow leads, but after five years they are no closer to solving this crime. We all thought for sure this case would have been solved pretty quickly, especially with all of the coverage we received. We even partnered with CrimeStoppers of NY in the hopes that their name and reputation would help us. They held a press conference on the second anniversary of his murder to announce their partnership and announce the reward. But even they haven’t been able to do anything more for us.

Along with one of Stephen’s friends, I run an annual softball tournament (Stephen Spina Softball Classic) to help raise money towards a reward. After four years we have raised $35,000 – I have attached the updated reward poster to this email. We have been very fortunate that the local media has been supportive and covers our event every year, but year after year it is becoming more difficult because there just isn’t anything new to report aside from increasing our reward.

We are at a loss. I have been carrying the burden for my family to work with the police and media, and do what I can to see that justice is served. I promised my mother and Stephen’s daughter that I wouldn’t stop fighting for them. I want my mother to have peace. His daughter (who is now almost 18) deserves to know who took her father from her. My heart breaks that I can’t do more for them to bring them peace.

Thank you for your support and consideration.

I am very sorry for your loss . I wish I could help but unfortunately I am only a detective in training ( 12 years old ) . This story seems heart breaking . Maybe if you report it to the police they will reopen the case and possibly find the murderer . Sorry for your loss :(