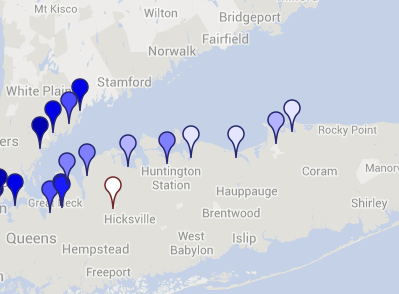 A report card and interactive map tracking upgrades at several local Westchester sewage treatment plants around Long Island Sound in Blind Brook, Mamaroneck, New Rochelle, and Port Chester shows three that are “at risk,” which means that they have a lot of work that needs to be completed in order to cut pollution required under federally mandated deadlines.

The report, released by Save the Sound and titled, “Healing the Sound’s Dead Zone: Are New York’s Sewage Treatment Plants Making the Grade?” shows that other New York  counties, including Nassau and Suffolk, received an “A” grade because they have already completed their upgrades. But Westchester and New York counties only received a “B” grade as they have not completed the upgrades.

According to Save the Sound, federal rules require sewage plants in New York and Connecticut to reduce nitrogen discharges to Long Island Sound by 58.5 percent in 2014. Connecticut has already achieved this reduction.  However, New York and Westchester Counties were given an extension to 2017. Too much nitrogen in the Sound is a major factor in the creation of  “dead zones” in the western Sound every summer that can stress and even suffocate marine life.

Detailed findings on sewage plant upgrades in Mamaroneck, New Rochelle, Blind Brook, and Portchester are noted on the interactive map. The report states:

“The upgrade at the Mamaroneck plant has been completed, while the work at the New Rochelle plant is scheduled to be finished in summer 2014. Depending on how effective those upgrades turn out to be, the county might also need to upgrade its Port Chester plant. The challenge is that the county won’t know how much nitrogen it needs to reduce at the Port Chester plant (if any) until January 2015, and it will then have only until the end of 2017 to complete the work. This will require swift design and construction to ensure the county reaches its overall 58.5% reduction.”

Curt Johnson, executive director of Save the Sound, said, “We applaud Nassau and Suffolk Counties for completing their nitrogen upgrades on time. But we can’t get complacent. Westchester County and New York City still have work to do before 2017 and time is getting short. We have to make sure the plants stay on track until the work is done….”

Save the Sound has advocated for New York state funding that would help coastal municipalities upgrade their treatment plants and repair badly-degraded sewer infrastructure that allows both nitrogen and bacteria into waterways, polluting the Sound and closing public beaches throughout the summer months.

Handyman one Suspect in Mamaroneck Murder